Today the Texas Education Agency proposes a rule[1] that would tell a high school student who has met the required passing scores on state approved nationally recognized assessment instruments that they are not entitled to a Texas High School Diploma unless they also submit to take a state created assessment for which they have no required performance standard.  It is the ultimate bureaucratic creation of data for the sake of data, and it is an unnecessary, punitive measure intended to threaten and intimidate parents into abandoning control of the education of their children.  More importantly, it is an illegal attempt by the commissioner to substitute his judgment for the judgment of the legislature.  Any Texan who believes in the separation of powers and the rights of parents to direct the education of their children must oppose this rule.  TPERN will be asking its supporters to voice their opinion through the public comment process.

The TEA proposed rule is an unnecessary and improper incursion into the constitutional powers of the legislature.  The substitute assessment statute allows the commissioner to define a method for the use of substitute assessments, but it does not permit him to add impediments to their use not contained in the statute.  The law is clear that the legislature intends that “a student’s satisfactory performance [on a substitute] assessment instrument shall be used to satisfy the requirements concerning an end-of-course assessment instrument.”

The commissioner errs by adding an EOC attempt requirement where none exists and where the existing statute in fact contemplates the opposite.

As set forth above, for instruments other than the PSAT and the ACT-Plan, the legislature clearly gives the student the choice of attempting another substitute OR taking the EOC.  The commissioners rule deprives the student of this choice.  Likewise, consider the clear statutory imperative of initial attempts in allowing the use of the TSI as a substitute assessment.  In that case the legislature wrote:

Where the legislature has expressed its will in one area relating to substitute assessments, but withheld any such requirements from other areas, the commissioner may not impose additional restrictions by rule.  The commissioner’s efforts to amend the statute by rulemaking exceed his authority and must be rejected.

Moreover, the restriction on graduation is wholly unnecessary.  What the commissioner wants is higher participation in the EOCs for accountability purposes.  This is accomplished simply with his amendment of Rule 101.4002 (e).  This amendment alone would require a student to take each EOC one time, but it would not prevent a qualified student from graduating if they failed to take the EOC.

By attempting to condition the use of substitute assessments on an initial failure of the state EOCs, the Commissioner markedly changes the law.  This is not a permissible use of rulemaking.  Moreover, it is wholly unnecessary.  The commissioner’s decision threatens to keep good students from graduating by rule when all statutory requirements have been met.  It cannot stand.

Finally, TPERN condemns the TEA’s willful avoidance of the legislature as the proper venue to address this issue.  In the proposed rule, the TEA admits that it was aware of the accountability issue since December 2018.  An entire legislative session passed without ANY ATTEMPT to adjust the substitute assessment statute.  Once the legislature had safely adjourned, the commissioner then undertook to change the law in the darkness of agency rulemaking, rather than in the sunshine of the Capitol dome.  This cynical approach to the rule of law demeans the vote of every Texan and should be repudiated by every sitting legislator.

[1] The proposed rule can be viewed at https://docdro.id/khK93zB

In 2013, as parents began to become more vocal about the outrageous emphasis on standardized assessment, and the time it was taking away from real learning, the Texas Legislature took notice and took the first baby steps toward rolling back the punitive STAAR assessment system that lobbyists with no education experience had ramrodded through in the previous session.  The number of EOC assessments was lowered.  Third grade promotion exam requirements were removed.  And the legislature, for the first time, put limits on the schools continual use of practice assessments to prep students for the STAAR.  Districts were strictly limited to two benchmark (practice) assessments per subject during the school year.  While arguably this is too much, since, if the assessment truly measures content mastery and not test taking ability, test taking practice should not be needed, it was a start.  Parents could relax knowing that students wouldn’t face benchmarks every 3 or 6 weeks as had become common.

But, alas, legislators apparently put too much faith in the ability of school administrators to follow the law.  Worried over punitive performance reports based on STAAR results, schools decided that they would comply with the limitation on benchmarks, not by cutting back on benchmarks, but by renaming all of them that exceeded the two permitted by law.  Now, a basic premise of law is that we look to substance not form.

The Texas Classroom Teachers Association immediately noted that “Some districts have simply renamed the benchmark tests (e.g., “cumulative formative assessments”) and continued to schedule more than two during the school year. Some districts are adding additional benchmark questions to other tests. At least one district tests students with a “Curriculum Based Assessment” (CBA) up to three times before giving a benchmark assessment.”  The American Federation of Teachers put its members on alert to report  “whether school districts will comply with the letter and spirit of this new law or will try to play games to evade it—for instance, by relabeling their test-prep tests as something other than “benchmark” tests.”

In Houston, former teacher Shadah Srrivers noted that students will take as many as 30 district mandated practice assessments, now relabeled as “snapshots.”  And meanwhile in Denton, the practice of renaming benchmarks has been documented by a parent boasting of their child’s success. 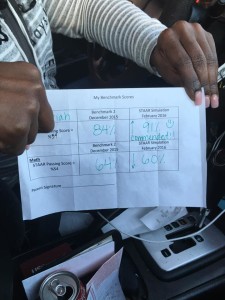 If you enlarge the photo, you can see that the student has been given a form labeled “My Benchmark Scores”  The form shows that Benchmark 2 (the maximum allowed) occurred in December.  But in February, the student was administered a “STAAR Simulation.”  This is an overt, unabashed violation of state law, and nobody cares.  Parents, please contact your senators and state reps and let them know that school districts should follow the law as well.  File grievances with your local school board the minute your child takes a third benchmark.  Substance matters.  Cute tricks like renaming your benchmarks are of no effect whatsoever.  Don’t let the schools tell you otherwise.

In a decision that surprises absolutely nobody, the Texas Education Agency has announced that it will ignore the recent changes to STAAR assessment imposed by the 84th Legislature.  In HB 743, the legislature required that assessments be shortened, that they occur only over the course of one day, and that they be independently validated.  This bill passed overwhelmingly and is in effect.  For this school year, all assessments must comply with the law.

However, the TEA has announced that it will not follow the law this year.  It has stated it will not administer shortened assessments until 2017 and that it will “decide” whether its current process of internal assessment review is an “independent” validation.  Clearly, if the legislature felt the assessment instruments were currently being validated, there would be no need for the law.  This is just wishful, if not willful, misconduct by the TEA.

For parents, however, there are significant ramifications. The TEA intends to subject your children to assessments that do not comply with the law and to permit schools to use these illegal assessments to promote or retain your children.  The clearest impact is in grades 3-5.  In our Forms and Documents section you will find a link to a new refusal letter based on the illegality of the assessments.  Please also consider signing the petition below!

TPERN also urges all parents to contact their local state representative and senator and demand hearings regarding the TEA’s belief that it is above the law.  The irony of an agency that tells parents that the law requires them to take the STAAR (when it doesn’t) deciding it can ignore the law whenever it likes, is too outrageous for words.  The leadership of this rogue agency must be called to account.

Update: We have been asked about documentation of the TEA’s position.  This is derived from the TEA’s Legislative Briefing Book, contained on their website, and linked herein.  The discussion of HB 743 begins on numbered page 80.  Discussing the STAAR assessments for Grades 3-5 the TEA states “The grades 3-5 assessments in reading and mathematics cannot be revised in time for the spring 2016 administration. The first administration of the shortened assessments would occur in spring 2017.”  A similar statement exists for the writing assessments.  Discussing the possibility that they do not need to independently validate the assessment, the TEA states “Prior to the spring 2016 administration, the agency must determine whether the TTAC, or USDE peer review process to approve state achievement standards and assessment systems required under Title I, meets the requirements of (a-11). If not, an independent entity will need to be contracted with to perform the evaluation pending available funding.”  They also complain there is no appropriation for this, indicating that they may choose to ignore the requirement because funds were not EXPRESSLY appropriated for the purpose.

Update 2: It has been pointed out that the TEA apparently back-tracked on writing assessments and will limit them to one day.  However, the will not fit within the time parameters set by the  legislature, so they are still not in compliance. This information is found here.

Update 3:  TEA lies and refusal continue.  Under pressure from the legislature and parent groups, they have now announced they will remove the field test questions from the assessments this spring.  While that will shorten the assessments by five to eight questions, it will not get them under two hours for grades 3-5 as required by law.  This is not a “victory” as some parents are claiming and as the press is reporting.  It is continued violation of the law by the TEA.